Graft-Versus-Host Disease (GvHD) is one of the most common complications after allogeneic hematopoietic cell transplantation (alloHCT). It is life-threatening for up to 50% of patients. The disease is usually treated with steroids, but steroid resistance or steroid dependence is observed in 40-60% of cases. In recent years, scientists have proven that fecal microbiota transplantation (FMT) may be a modern and promising therapy due to the immunomodulatory potential of the intestinal microbiota.

The process begins with the activation of T lymphocytes derived from the material transplanted from the donor, recognizing the recipient’s tissues as foreign and leading to their destruction. During the process, the digestive system’s Paneth cells and goblet cells are the most damaged. In response to the damage, the recipient’s organism produces pro-inflammatory cytokines (including TNF-alpha, IL-1, and IL-6), signaling and initiating the inflammatory process. This causes an influx of antigen-presenting cells (APC) while enhancing the activity of donor T cells. The goblet cells secrete mucin, which separates the bacteria found in the lumen of the intestine from the epithelial cells, ensuring the integrity of the intestinal barrier. The mucosa of the digestive system plays a significant role in protecting the body against the penetration of pathogens from the external environment. In addition, Paneth cells are responsible for the secretion of alpha-defensins, antimicrobial peptides that maintain an appropriate balance in the composition of the gut microbiota.

The role of the intestinal microbiota

In recent years, reports confirm intestinal dysbiosis is a risk factor for many diseases. Reduced bacterial diversity in the gut leads to lower overall survival and an increased risk of GvHD in patients after alloHCT. In addition, dysbiosis predisposes patients to colonization with antibiotic-resistant bacteria (ARB), which significantly increases the risk of death during infection. We have shown that ARB colonization is recognized as a risk factor for developing graft versus host disease and other complications after hematopoietic cell transplantation. A healthy and diverse intestinal microbiota prevents the penetration of pathogenic bacteria strains, competing for the microenvironment and other resources.

The literature mentions many strains or types of bacteria that may contribute to lowering or increasing the risk of developing the disease. Among them, the genus Clostridiales stands out, which produces short-chain fatty acids (SCFA). One of SCFA butyric acid has a beneficial nutritional effect on enterocytes (intestinal epithelial cells), supports the integrity of the walls, and inhibits apoptosis, thereby reducing the symptoms of GvHD. On the other hand, the presence of large amounts of Enterococcus or Akkermansia muciniphila may predispose to exacerbation of the disease and reduce the prognosis of patients.

Scientists believe that determining the gut microbiota composition during bone marrow transplantation would allow early treatment initiation and prevention of complications in patients predisposed to develop GvHD. In addition, patients using antibiotics and other treatments after bone marrow transplantation are at high risk of reducing the diversity of bacteria in the gut. The destruction of Paneth’s cells further allows the growth of potentially harmful bacteria, including antibiotic-resistant ones, complicating treatment.

The first-line therapy is steroid drugs, but as many as 35-50% of patients are resistant to the treatment. Second-line therapy has not been established, but ruxolitinib treatment is best documented. Other therapies including extracorporeal photopheresis (ECP), sirolimus, anti-TNF antibodies, mycophenolate mofetil, anti-IL-2R antibodies, methotrexate, alemtuzumab, and anti-thymocyte globulin are less effective or less studied. In addition, scientists are investigating the effects of alpha1-antitrypsin, a mixture of anti-CD3 and anti-CD7 antibodies conjugated with recombinant ricin A and vedolizumab. Among the therapies that did not show a positive effect is the use of agents such as brentuximab vedotin and begelomab.

Scientists are still searching for the new treatments and the fecal microbiota transplantation (FMT) is one of them due to the proven interaction of the microbiota with the immune system and the aforementioned positive effect on maintaining intestinal barrier integrity. FMT helps increase the diversity of bacteria, especially those that produce SCFA. Transplantation of the gut microbiota can significantly improve a patient’s prognosis by restoring adequate biodiversity, which reduces infection and death risks. We are one of the leaders in this topic in the world; our data indicate the effectiveness of FMT in GvHD at 50% in patients with the dismal prognosis. This is believed to be a breakthrough.

In our latest review https://www.mdpi.com/2227-9059/10/4/837 we summarized all the reports that have appeared so far. According to the most recent data, FMT was performed in almost 200 patients with GvHD, with 372 procedures. It has been shown that the response to FMT treatment in the course of GvHD can reach up to 74%. Due to its high efficiency and safety (4.8% of side effects), researchers hope that FMT may become a standard treatment for GvHD. A summary of clinical trials of FMT performed in the treatment of graft versus host disease is presented in Table 1. 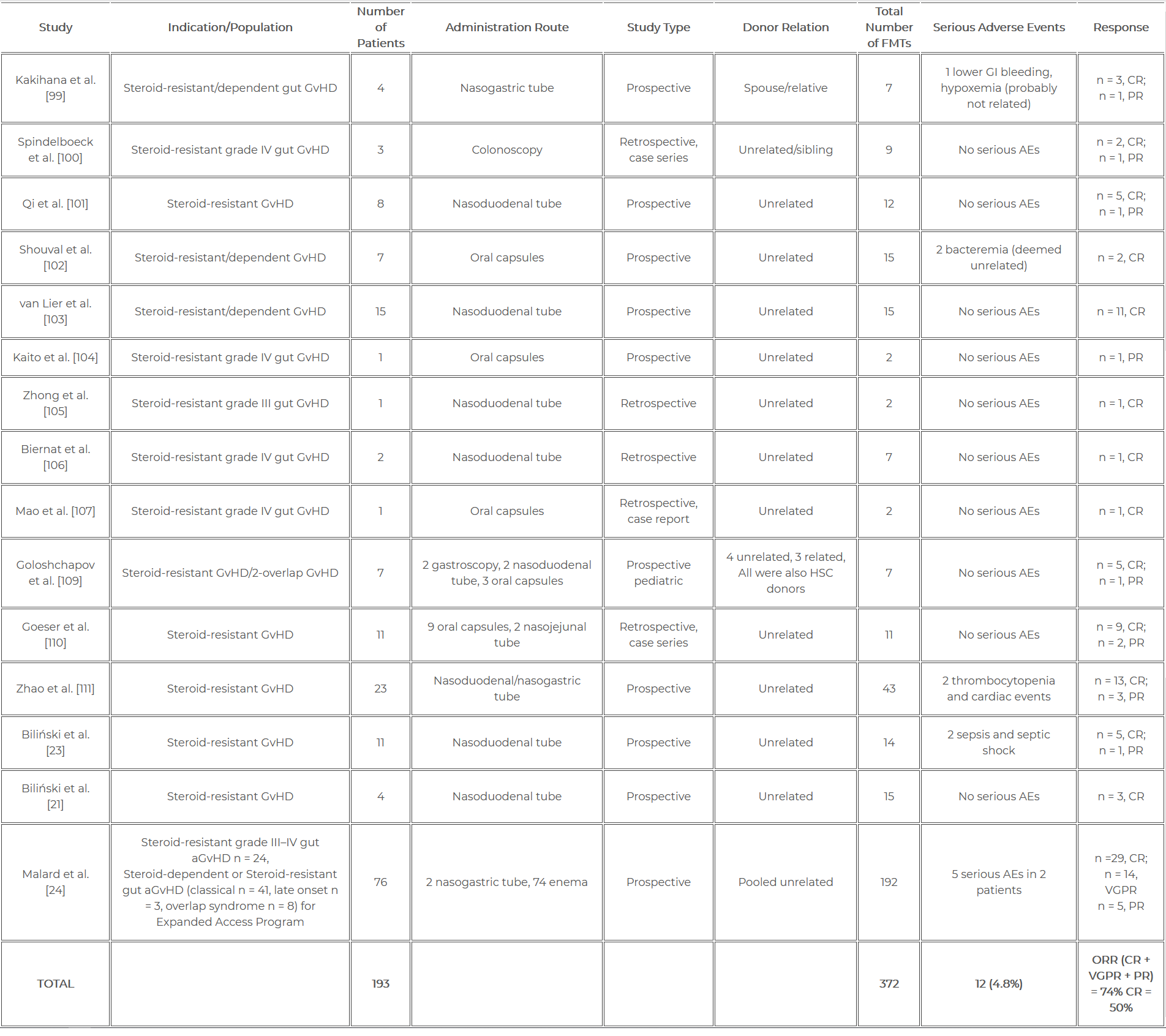