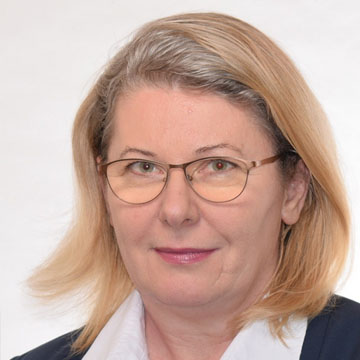 Microbiologist. She graduated from the Maria Curie-Skłodowska University in Lublin. In the early 90s obtained the title of second degree specialist of medical microbiology, working mainly with anaerobic bacteria. In the years 1998-2006 she worked on the determination of the clonal structure of multiresistant strains of Staphylococcus aureus (MRSA) at the Department of Epidemiology and Clinical Microbiology of the National Medicines Institute (NIL) in Warsaw (formerly Central Laboratory of Serum and Vaccines). The phenotypic-genotypic strategy proposed at that time made it possible to detect several MRSA “clones” in Poland with a global range. One of them, the Iberian clone, was characterized by a reduced sensitivity to vancomycin (hVISA), which was demonstrated for the first time in Poland in studies with her participation. From 2007, she participated in the research of the Department of Biochemistry and Biopharmaceuticals (ZBB) of the NIL. These studies focused on detecting the mechanisms of action of anti-cancer drugs as well as multi-drug resistance in the search for an effective anti-cancer therapy. She conducted research with the use of various techniques of molecular biology as well as cellular models allowing the evaluation of the cytotoxicity of the investigated therapeutic combinations. Her original research concerned the search for molecular biomarkers of Huntington’s disease (HD) (with a known genetic basis) in the area of ​​energy metabolism, including branched chain amino acid (BCAA) metabolism, in order to detect early pathological changes in HD and to uncover a therapy that inhibits the development of the disease. Work in this area was carried out as part of the European Huntington’s Disease Research Network (EHDN) project. She was the manager and/or contractor of 3 research projects of the Ministry of Science and Higher Education and 2 EHDN. Author and co-author of over 40 publications, and she actively presented her works at numerous national and international symposia. In the course of work both in the field of microbiology and medical biology, she gained experience in developing molecular biology techniques in the field of microbiological diagnostics and medical biology. Her current interests include, among others. explaining the role of the microbiome and the influence of infectious agents on the course of chronic diseases of the nervous system and on the development of neurodegenerative diseases of known and unknown genetic background. Since 1998, she has been a member of the Polish Society of Microbiologists, since 2003, the National Chamber of Laboratory Diagnosticians, since 2005, the Polish Huntington’s Disease Association, and since 2009, a member of the European EHDN network (active in the biomarker group). Currently, she works in the Department of Microbiology of the University Medical Center of the Medical University of Warsaw, where she coordinates work in the area of ​​molecular diagnostics. In Human Biome Institute she is an expert in the development of new methods of culturing anaerobic bacteria.